We had an absolute pleasure in doing another Julie Tries video with Maryland Jeet Kune Do! Don’t know what it is? We asked owner JB to tell about his studio!

What is Jeet Kune Do? 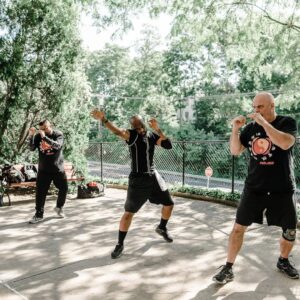 Jeet Kune Do is a philosophy of martial arts, combat, and life that was developed by the late actor, martial artist, and philosopher, Bruce Lee.  Jeet means to Intercept, Kune means Fist, and Do means Way; the Way of the Intercepting Fist.  This explains Bruce Lee’s core strategy, which was intercepting your opponent’s attack with your own motion.  At it’s highest level, this means avoiding, preventing, or stopping the fight before it even begins.  This is why Jeet Kune Do is also called the Art of Fighting without Fighting.
It’s core idea or concept is the idea of being able to use whatever methodology or technique a situation may require, but not being doctrinally bound by that method or way.  Beginners are encouraged to practice Jeet Kune Do with the idea of using it as a means to develop their personal will, discipline, and take ownership and responsibility for every aspect of their life.  Jeet Kune Do uses martial arts and combat sports as a method to learn how to overcome your anger issues, ego, foolishness, and greed.

What can a person gain from practice Jeet Kune Do?

Based on Bruce Lee’s teachings and writings, we practice Jeet Kune Do for two main purposes.  First is to learn how to 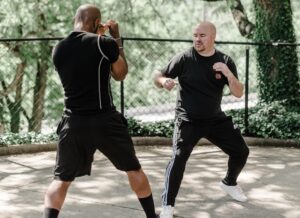 overcome the opponent in front of us; anyone who prevents us from living a peaceful life by attacking us, causing injustice, or treats others inhumanely.  Secondly; we learn how overcome our own baser instincts and anxieties, so that we are not the ones attacking others, being unjust, or inhumane.  In the end, our Jeet Kune Do practice is directed toward ourselves, not toward hurting others.

Is it true that Bruce Lee created Jeet Kune Do? 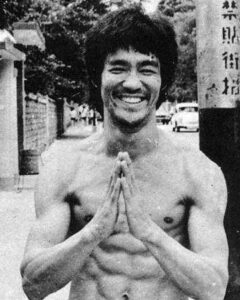 Yes.  Jeet Kune Do is the result of many years of experimentation and exploration that Bruce Lee went through.  As I mentioned before, we look at Jeet Kune Do as a way to practice martial arts, a path, rather than a martial art by itself.  Out of his experience with Chinese boxing, specifically a method called Wing Chun, Bruce Lee originally invented a system he called Jun Fan Gung Fu.  Lee Jun Fan was his Chinese name, so this could literally be taken as “Bruce Lee’s Gung Fu”.  He blended Wing Chun with Western boxing and took ideas from Fencing and other arts, but as time went by, he felt even this was too limiting for both self-defense and for personal expression.  While doing this, he was also delving into philosophy both Western and Eastern, and much of the process of developing JKD reflects this.  Much of the philosophy behind Jeet Kune Do derives from the practice of Zen Buddhism, as well as the philosophies of Daoism and Krishnamurti.  Jeet Kune Do thus came about as a way of training Jun Fan Gung Fu as well as other arts as a process of self-exploration aimed toward directness, freedom, and simplicity, rather than just a fixed methodology.  In many ways, it could be seen as a forerunner to what we today call “mixed martial arts”.

When did you first start Jeet Kune Do?

I began studying Jeet Kune Do in 2000, while attending Anne Arundel Community College.  My first instructor also taught a college level PE course in general self-defense and martial arts.  I had grown up doing martial arts like Okinawan karate and Taekwondo, and loved the movies of Bruce Lee. 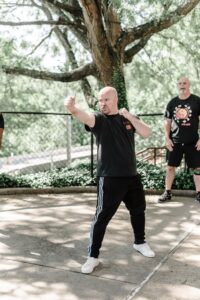 My parents had gotten me Bruce Lee’s book, the “Tao of Jeet Kune Do” one year for Christmas, and I fell in love with the idea of using the martial arts to become a more disciplined and enlightened person.  So naturally, I jumped at the chance to actually study Bruce Lee’s teachings hands-on.  Since then, I have had the opportunity to train with many great Jeet Kune Do men and women; including some who were hands-on students of Bruce Lee himself before his passing.  I’ve lived and practiced in Zen meditation in Buddhist temples.  I’ve had some of best boxers, kickboxers, grapplers, and stick fighters in the world help me on my journey.  There have been so many experiences, good and bad, that have helped shape me and teach me on this path.

What made you want to open your own studio?

Opening my own studio seemed a natural outgrowth of my own Jeet Kune Do practice.  My original Jeet Kune Do teacher moved away, and so I began flying back and forth from Maryland to California to train with his teacher and others.  In order to have anyone to practice with here in Maryland, I had to find people to train with me.  So the story of Maryland Jeet Kune Do is also the story of my growth as a practitioner, and I am extremely thankful for all of those who have come alongside me along the path, especially those who have been with me since the beginning, and those who have stood by me and their fellow practitioners here at Maryland Jeet Kune Do through the hard times of the last few years.  Bruce Lee once said that “under the heavens, there is but one family”, and I am so proud that the people I am blessed to train with here at MDJKD treat each other like brothers and sisters of that one family.

What was it like opening your new location during the pandemic?

We signed the lease here at Savage Mill two weeks before Governor Hogan initiated the lockdown here in Maryland.  The 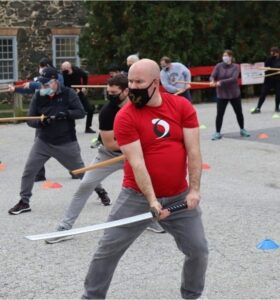 constraints on the fitness and martial arts industry were very strict, and we had no idea when we were going to allowed to open.  Savage Mill itself was extremely understanding toward us during this unprecedented time and helped us tremendously.  The MDJKD family rallied around us, we had supporters do fundraisers, we continued to train over Zoom, and continued to support each other.  There is a word in Zen Buddhism called shugyo, which means deeply training both one’s entire self, body and mind, through the most extreme circumstances that life can offer.  Every part of your life becomes an avenue to practice Zen, every circumstance is training.  The Zen Master Shido Bunan once said, “If you think of everything as training, your suffering will disappear.”  So this is the kind of attitude we try to approach life with at Maryland Jeet Kune Do, and opening a new location during the height of the lockdown was certainly a fine opportunity for training.  I am very grateful for everyone who helped me.

What skills can a participant expect to learn at Maryland Jeet Kune Do?

A new member will start by learning basic Zen meditation and breathwork, as well as open hand striking, kicking, stick fighting, and grappling.  One of my mentors once said, “There are no advanced techniques, just better execution of the basics”.  As you progress, you learn how to move in different situations; stand-up striking, what we commonly call kickboxing; standing up grappling or clinch fighting, and grappling on the ground; in addition to working with weapons like sticks, knives and more.  With each step, you become more and more comfortable in these different situations, and the pieces come together holistically until you are a fighter capable of finding a way to survive in any situation.
You will learn how to work with others and help them to find their way in the martial arts and in life as you go through partner drills and sparring sessions.  You’ll learn how to deal with your own ego as you find that there are days that you lose and have to keep going.  You will learn how to face the anger, anxiety, and fear inside of you and overcome it through the combative stress inoculation drills we practice.  Through the clothing drives and fundraisers we do, you’ll learn to share the things you have been blessed with donate your time and energy to help others who don’t have access to the things you do.

How do I start?

Relating a very famous Zen story; Bruce Lee once said that before you can taste the tea he would make, you must first empty your cup.  In Zen, we call this shoshin, or beginner’s mind.  The people who succeed at Maryland Jeet Kune Do are the ones who are willing to come with an open mind every day, ready to face a new challenge.  They come ready to find the things inside them that make them better fathers or mothers, better coworkers, better members of their community and to confront the things that are holding them back.
If that you, you can go to our website at Marylandjeetkunedo.com and contact us or come to Savage Mill and ask for me, we’ll get you scheduled for an Introductory Session so we can get to know you and you can experience the practice of Jeet Kune Do firsthand.
Every moment is your chance.
There are no limits.
← A Look Inside Savage Fencing Club Explore Something New in 2022 →
Share This